The government announced a £150 payment to help residents with rising energy costs. Find out more about how we are making the payments.

If you are new to local government, you may find it useful to understand the role of local government and exactly what Maidstone Borough Council does. In practice many services are delivered by working together with our partners in local government (Kent County Council and Parish Councils) and across the public sector including with police, fire and health services.

Among other services the council provides services for:

The map below shows the Maidstone offices:

Parishes have powers to spend money on the following:

Maidstone is made up of the unparished town and 41 parishes, 35 of which have parish councils. The map below shows the parish boundaries:

The map below shows the ward boundaries: 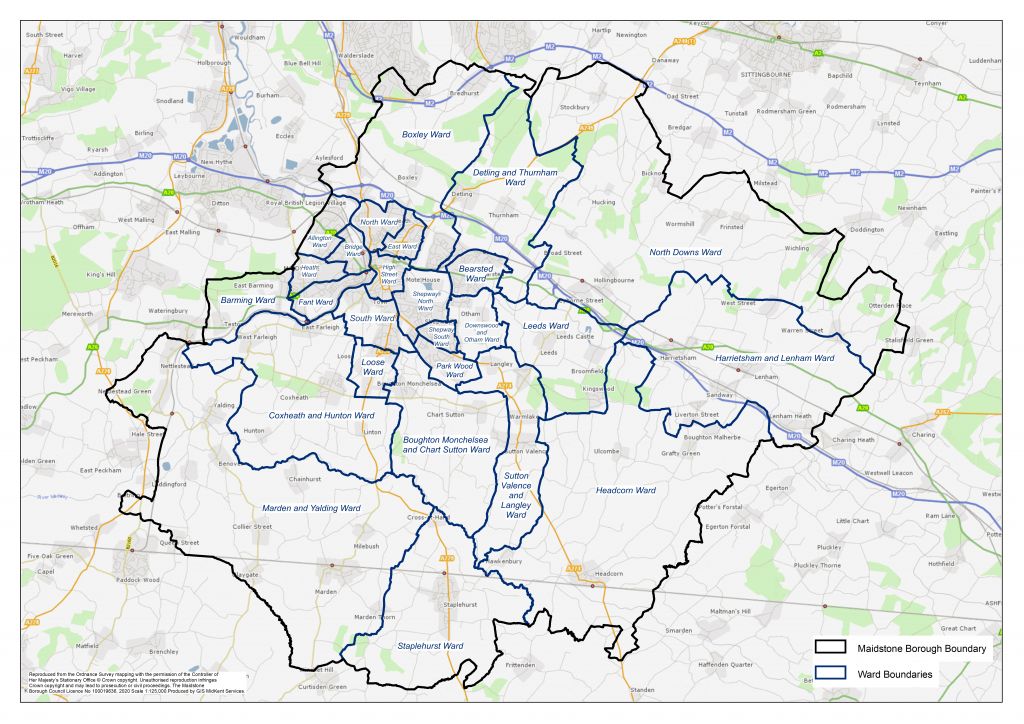 The council has a statutory obligation to support the community in times of emergency e.g. floods. Employees are required to assist in the Emergency Plan and training will be provided for those staff selected for specific roles. You should be aware that you may be called upon at any time.

How are decisions made?

The Council comprises 55 Councillors, with one-third elected three years out of every four. Councillors are elected for an area known as a ‘ward’ and help to sort out problems in the area and speak up for the public. Councillors are democratically accountable to people in their ward, but they also have an over-arching duty to the whole community, including people who did not vote for them.

Councillors are elected for a period of four years and hold office from the fourth day after being elected until four days after the next regular election four years later (unless they resign or become disqualified). Where a Councillor ceases to hold office within the four-year period, a vacancy arises. A by-election will be held unless the vacancy arises within 6 months of the next regular Council elections. Only registered voters of the Borough or those living or working in the Borough are eligible to hold the office of Councillor.

The Council delegates most of the decision-making to a range of Committees and Sub-Committees as shown below:

How the decisions are implemented?

The council employs officers to give advice, implement decisions and manage the day-to-day running of the organisation. Employees of the council are known as ‘Officers’ and elected
Councillors are known as ‘Members’. A code of practice which governs the relationships between officers and Councillors is available on the intranet within the Code of Conduct.

The organisation works as one to develop the borough and deliver its policies effectively.

Members and officers of the council work together to ensure the vision is achieved.

The roles are complementary: Councillors and Officers working together to achieve success!

Previous - Our ResponsibilitiesNext - Next Steps in your role
Back to top